In a new survey of 1,000 adults by North West law firm Gorvins Solicitors, a third (34 per cent) felt that the pressure of women having to get a job, as well as have children explained why marriage and long term relationships in 2015 were more likely to break up than a generation ago.

However, other pressures of modern life were also identified as a reason for divorce and break ups. Nearly half (43 per cent) felt communication technology such as  email and mobile phones made it easier to cheat,  whilst 49 per cent believed that infidelity was rife because of social networking sites. 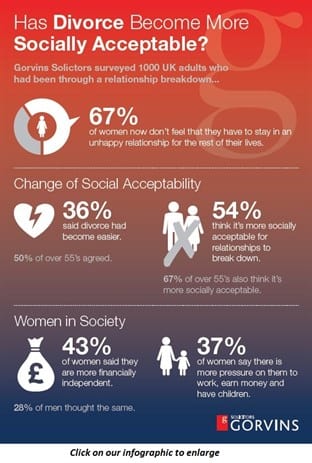 Meanwhile the ease with which today’s generation can get a divorce and the increased social acceptability of a failed marriage were also given as reasons why today’s relationships were more likely to break down.

Almost half of those surveyed said infidelity, either as a one-off or consistent cheating, led to their relationship breaking down, with men and women equally blaming their partners for the infidelity

“Financial independence is making the divorce process less daunting for many women these days” says Sally Leaman, Head of the family law department at Gorvins Solicitors.

“Those who work are a lot less dependent on their husband. So their increased financial stability makes it easier to instigate divorce. Yet ironically, perhaps the pressure of two partners working is also a reason for a breakdown in a relationship.

And, of course, couples are more likely to achieve a clean break order if both partners have solid financial standing and security.”

Figures from the Office for National Statistics in 2011 suggest 42% of marriages are destined to end in divorce with around half ending in the first ten years, and in 2012 the number of divorces was highest among men and women aged 40-44.

In this latest survey, two-thirds felt a typical relationship is more likely to break down now that a generation ago. Overall, 40 per cent felt the biggest contributor to the breakdown of a relationship is “growing apart” (40%), with more women (47%) than men (37%) identifying this as the cause.